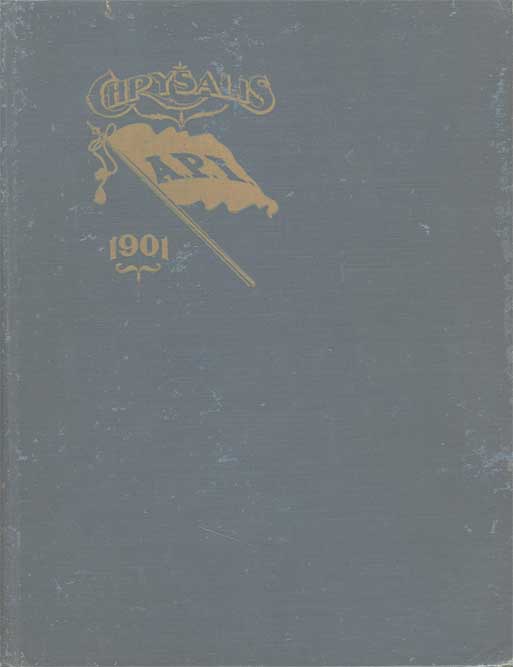 We beg to present to the public, the first edition of the Chrysalis. We realize that it is impossible to please all, but we hope that our humble efforts will meet a pleasant reception from the majority of our readers.

Heretofore, the Glomerata has been called “the Senior Class Annual,” which has been a misnomer; the seven fraternities, representing usually about one-third of the student body, have each been allowed a representative on the Staff, while the other two-thirds of the student body was allowed one representative; this gave the fraternities seven representatives and the non-fraternity men only one. With the board of editors thus chosen, the previous annuals have represented only the interest of the fraternities; when the Class of 1901 became Seniors, it became evident at the outset that a clash was inevitable. The non-fraternity men demanded equal representation on the Advisory Board, which they should have had, for eight of the eleven players on the Varsity Foot-ball Team belonged to their number; as this could not be settled otherwise, it was finally agreed to arbitrate the matter, and three members of the faculty were chosen as arbitrators these quickly decided upon equal representation.

Then, when the time for election of class officers came, the fraternity men would not attend the meeting (because they were slightly in the minority and foresaw the fact, that they would not be able to control matters as they have done in the past); some of them even refused to participate in the celebration of the class day exercises.

Then, when a staff was to be chosen for the Glomerata, the non-fraternity claimed an equal number on the staff – this time, as usual, they were offered ONE and told that they did not deserve more – this was not accepted, and it was decided to publish a non-fraternity annual.

To say that we regret the division in our class, would be useless; but it was simply a question of being imposed upon or asserting our rights, and we chose the latter course. This is why we have two annuals, and also why the Chrysalis comes to you, dear reader.

With these facts before our friends, we hope that you will enjoy the good and pardon the faults.

To the fraternity men, we have no apologies to make; anything in the Chrysalis concerning them, they may take “as they like it.” To the non-fraternity men who are in the under classes, we present the Chrysalis, with the hope that they will try next year to do better and let each succeeding year see the Chrysalis improve. Let it be your motto,

“That honor and shame from no condition rise,
Act well they part, there all the honor lies.”
Auburn's history, in 1901 | Next | Covers | Home