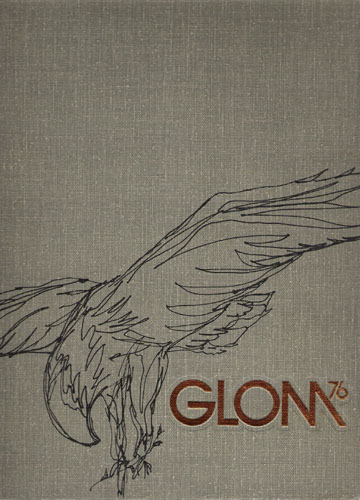 The cover of the 1976 Glomerata, the 79th edition of the yearbook.

Right about at this point in my collection of the old historic Gloms I began the difficult process of deciding which covers are the best. There are some great ones, two or three bad ones -- the 80s, what can you do? -- and then some standard plain ones.

This one, however, is very nice. The grey has a nice canvas-like texture to it. The writing is raised and in a coppery embossing. The frantic ADD drawings of an art major make this a unique edition. The right wing, The art is so frenetic as to make one think that the original cover was lost and no one realized it until just under the deadline. Fortunately, someone on the staff knew someone who's roommate was majoring in art and that guy had a few minutes and here we are. Incidentally, does wrap around to the back cover.

At any rate, this would have been my mother's freshman yearbook, had she attended Auburn. There'll be no more mentions of Alabama Polytechnic, since the charming old A.P.I. name was retired in 1960. A lot of other things have changed since the 1953 book, which was the last one closely studied in this series.

In fact, the Auburn of 1976 is looking a lot more familiar to my 1990s Auburn eyes. Debbie Bishop, Scotty Crawford and Rex Yancey are the business editor, photo editor and the editor, respectively, that will give us our trip back through time.