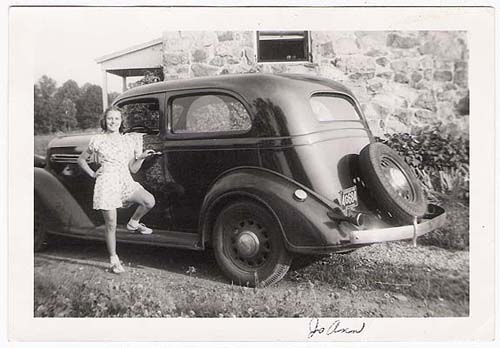 The license plate says 1944. It is a Jefferson County, Kentucky tag, so Jo Ann lived somewhere in the Louisville area. After asking many people and consulting the Internet the best guess is that the car is a 1939 Chevrolet.

And that's all of the context. There's the non-descript section of this house. In another picture from this series there's a little white picket fence and cedar bushes. Otherwise we're left to our own imagination.

So we could say that this photograph went to some aunt and uncle that haven't been able to visit lately. Too much work and too few gas rations. They've been keeping up with distant family through mail and photographs when they can. And Jo Ann! Can you imagine how big she's gotten! Why, before long guys will be asking her out for dates. She's almost as tall as the car!

Or we'll say Jo Ann was some soldier's little sister. He's off in Europe and when he went away to the war two years ago he hated the kid. He's beyond being eager for a warm bath and hot food. He wouldn't mind not having to wear a helmet. He could cope without carrying a weapon for a while. He's ready to come home.

He'd even tolerate his little sister.