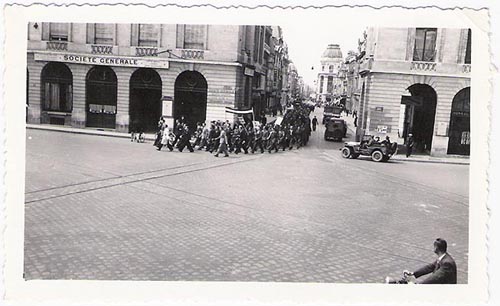 We're in Northern France once again. No date is provided, but I'm taking the parade and the casual demeanor of the soldiers on the right to mean this is after May 7th, 1945, when the Wehrmacht surrendered to the Allies, thus ending the European war in this very city.

This is a big street because it is a circle. The guy on the motorcyle has stopped his drive to take in the parade. It was important enough for the photograph to shimmy at least part way up a fountain and statue dedicated to Louis XV.

The Societe Generale is still there today.