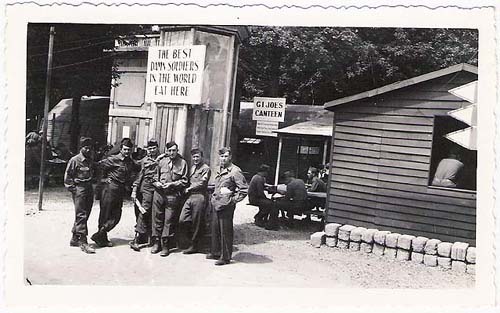 Everything we know about this picture is what we see here. The rest of its history and meaning are lost to memories.

There's no placing it, but you know who eats at the restaurant. There's a trading post in the background, and you had to show your pass just to get in there according to the smaller sign.

Two things to notice here: Apparently the soldier in the window to the right was preparing to moon the camera, but the photographer was just a bit too fast for him.

Secondly, there is a curiosity here. Standing with the non-commissioned officers and the men is an black soldier. Some of the specialized non-combat Army training was integrated in 1944, and judging by the design of the margins (and the batch of dated photographs that this one was discovered with) that puts this photograph around 1945. If he belongs in that unit that man is one of the earliest pioneers of military and social change.