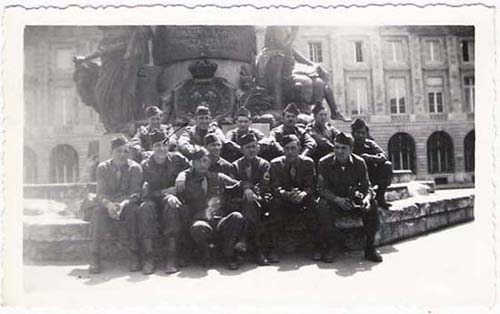 Rheims is in northern France, the heart of Champagne Country. It is historically important as the place where the kings of France were crowned.

Here's your French surrender trivia for the day: They had it down as a military tactic long before the Germans rolled through. In the first century B.C. the area was home to the Remi, a Belgic tribe of north-eastern Gaul. They surrendered and curried favor with their Roman overseers.

In World War I, the city's treasured cathedral was severely damaged by German bombardment. The ruins became a big portion of the anti-German propaganda as an example that German aggression targeted cultural landmarks. After the Great War the cathedral and other important landmarks were rebuilt.

During World War II, Rheims was where the Allies received the unconditional surrender of the Wehrmact. And that's a baker's dozen of soliders who are ready to come home and pick up the rest of their lives. Between them they wear every expression you could find in the part of war in which you're not being shot at.

The specific location is the Place Royale, the statue is dedicated to “wise, virtuous, and magnanimous Louis XV.,” by Cartellier and dated 1818. Not a lot of people shared that particular opinion of Louis.