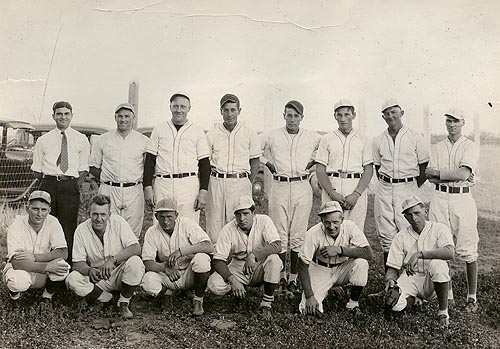 The local team had high hopes for this season. The uniforms were finally in and, even though there had been a mix up with the Midwestern Cap Company, the new look really boosted morale.

The players had to provide their own belts, and no one could agree on the socks, but they were the talk of the league. Now only if they could field the ball cleanly, they'd have a real shot in the Memorial Day tournament.

Everyone in your town is represented in this photograph. There's the equipment manager in a bad tie standing next to the jock, the fireman and farmer. The next two guys had secrets, but no one ever talked about that, except the ladies late in the evening while they were cleaning dishes. Jimmy over there got picked on for more than his ears. The guy on his right let him stand there just because he was that cool.

The hometown boy, the guy that was a hit with all the ladies were on the far left. The one guy wearing his cap straight wasn't too far away from a stint at the upstate pokey. Two more guys who grew up side by side and went everywhere together, even to the soda shop, managed by the last guy on the right.

One of these guys, at least, belonged to someone that owned this photograph. Did he play in the field? Was he a pitcher? Was he good or a goof? Did he think of this team as he grew old and gray?