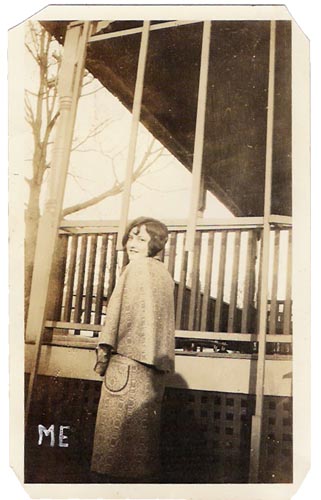 We're falling back in time to the 1920s now. This would be just before the Great Depression in rural northeast Alabama. There are many photographs in the sequence which comes to us through an old scrapbook.

This is the young woman who made the album. There are context clues sprinkled throughout the book, giving just enough hints into her life to be tantalizing. For now, all we know is that this is Me. Or rather her.

The town was only a few decades old, a venture of people looking for iron ore. By the 1910 census Anniston boasted 12,794 people. It was becoming a military town during her young life, with great swabs of land purchased the decade before and any day now after this photograph it was announced the camp would become a permanent fort.

Times had been tough, but things were looking up. There were reasons to smile.

That's her house there. It appears in a few of the photographs in the sequence. Shame about that tilt. And who's that guy in the shadow? More on him in a bit.