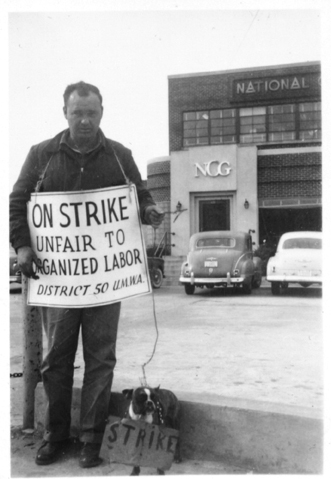 The National Cylinder Gas Company was unfair to organized labor and they weren't going to take it anymore.

No idea where this is, but I'd guess Tennessee or north Georgia. We get a good idea from the cars and from the union's history that this could be 1943 or 1945-1947.

If it was the '43 mid-war strike then it led to the governmental seizure of the mines. How's that for unfair?

There is a similar photograph, taken just to the right of this view. A man was dressed in his coat, tie and hat demanding change with a smile.

This gentleman is a little more intent, and we've no idea why the disparity exists, unless the photographs were taken at different points during the strike. These are family pictures though, since the striking union member is shown alone. If this had been for public consumption they would have crowded in, marched in a circle or chanted.

Hey hey, ho ho,
Your capitalist approach to make money off of back-breaking efforts has got to go.
Hey hey, ho ho.

Notation: Rebirth of the UMWA | Questia