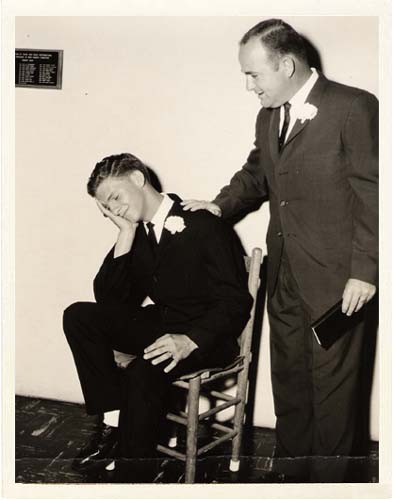 "And so you see son, by saying 'I do,' you're inviting a lifetime of love ... or scorn and ridicule for that one time in Memphis ... I mean all you did was smile at that pretty girl who was making eyes, but years later that's all you hear about: 'What about that Memphis floozy of yours!?' ... So ... yes, a lifetime of love young man. Its yours to have!"

This is 1966. A friend's father, a dear man. A young boy here, impossibly too young to be married. Does he shave yet?

The preacher/father figure thinks this pose is a bit silly, but he goes along with it. The groom-to-be is too nervous, hears too much blood rushing through his ears and is wondering if breakfast was, in retrospect, such a good idea after all. That little smile isn't about the picture, which is very from his present thoughts.

In the large version of the photograph that plaque on the wall is honoring all of those people who donated to buy church furniture in 1944. Do they remove that plaque years later when they replace the furniture once again?

Was this chair part of the 1944 acquisition? Were there already 20 years of history, weddings and funerals in that creaking old wood?

The groom died recently. Suddenly. He was a good and decent man, loved by all who knew him. The night before he died he was working at his church. He counted a loving wife and three children as the success of that September 1966 day.

A lifetime of love, its yours to have.