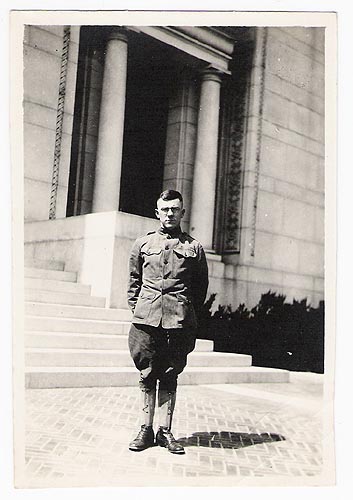 I found this photograph in a little town on the border of Alabama and Georgia. There were boxes of pictures, but the puttees on this man caught the eye. Puttees replaced leggings as standard issue for the moisture of France.

This photograph, right away then, is an antique. The date confirms it, but then this date means so much.

Scotty was in California, but on the French war front this was a busy day. The first Americans entered combat only a month earlier and most were still green soldiers.

The scene was in the village of Hamel and and the Vaire Wood as doughboys and Australian soldiers fought together -- three brigades from down under and 1,000 Americans -- for the first time. Some 200 Americans were killed, wounded or missing. Other innovations stemming from that battle included how infantry and tanks worked together and the first ever resupply by planes.

What was going through Scotty's mind? Was he eager for war? Hoping to wait it out stateside? He had no real idea when the war would be over.

On the other side of the country President Woodrow Wilson spoke at Mount Vernon, delivering his famous "Four Points" message, "What we seek is the reign of law, based upon the consent of the governed and sustained by the organized opinion of mankind."

Scotty is standing in front of the Hearst Mining Building on the UC-Berkeley campus. It was designed in 1902 and completed in 1907. The building is named for miner and U.S. Sen. George Hearst, the father of journalism magnate William Randolph Hearst.

And whatever became of Scotty? How did the photo travel across the country? We may never know.