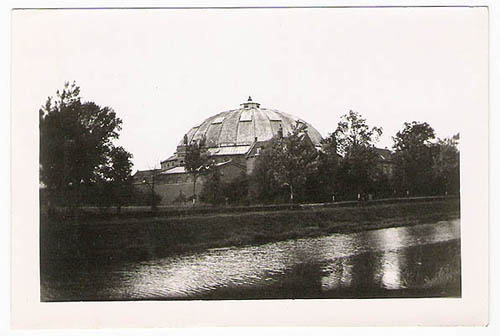 I found this photograph in an antique store in Louisville, Ky. There was a stack of pictures, some you see here, and this. My initial thought was: Neat building.

I flipped it over and saw the one clue about the building and it remained a mystery. Oh there were theories, it could be a church, a performance hall or the Netherlands' first domed stadium, but no certain answer. Off and on I've tried to source the building. Over the last week I've spent more than a few minutes trying to track it down.

And then, on Flickr, I found the modern perspective. Looking at the large version of that photograph you can tell that the photographers were standing only a few yards and 55 years apart.

There's more development right up to the Binnen-Spaarne shore now, the top-most portion of the building has been changed a bit, but it is definitely the same place.

It is a prison.

You wonder if the guy standing across the river knew what he was photographing. You assume it was a soldier at or after the end of the war. Surely he would have known a little something about the area's prominent building.

He would never believe you if you told him that six decades later we'd be looking at his picture, a recent picture from the same spot and a photograph from a satellite in space.

Coincidentally, the photographer of the modern photograph is a prominent member of our own local online community.