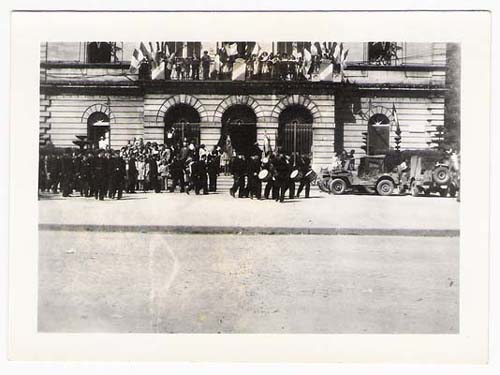 Saint Dizier is in the Champagne-Ardenne region, to the east of Paris and on a secondary route across that portion of the country. When the people saw the Nazis removed there wasn't long before the war was over.

And everyone turned out for the parade, the beginnings of which we see here. The drummers marched just in front of military jeeps, the ladies stood on the steps, on the balcony above and peered from the windows of this suddenly celebratory old building. On the right of the ledge are two speakers, probably blaring out the good news and national music.

Weary men marched by under waving flags and onto an empty street.

If only the photographer had panned up, or stepped in a few paces, before exposing the film, the many things we might have learned.

The château was a German base during the war, but that wasn't all the action St. Dizier had witnessed. Napoleon, 130 years earlier, earned his last victory on these lands.

Noted: Wikipedia | The History of the Restoration of Monarchy in France